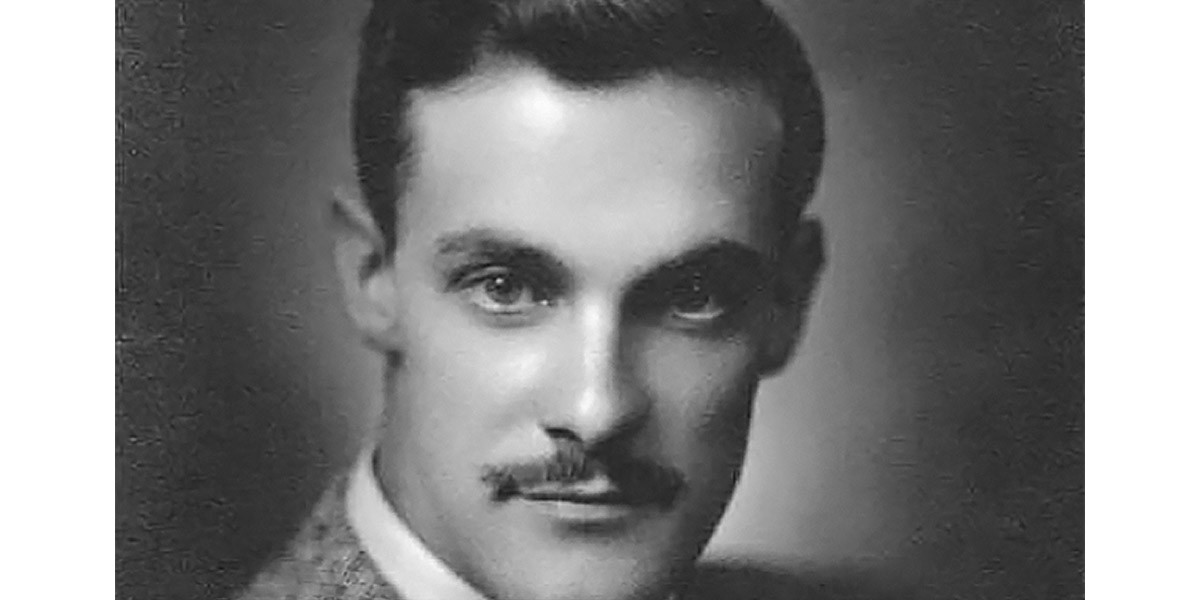 Presentation of an Honorary Graduand 1998

They were a semi-aquatic race who lived on low swampy islands and threaded the winding channels through high reeds in flat-bottomed boats.

So wrote John Seymour, not of the residents of Barrow on Soar where John Whitworth lives, after an outbreak of flooding in the Soar valley, but about the Fen Tigers with whom John is proud to be associated albeit as a twentieth century descendant. Born in Ely in 1921, the son of a potato merchant, John recalls sitting on his brother’s lap at the age of four playing the central part of the piano keyboard. This is his first musical memory.

John boarded at Kimbolton School but the onset of World War 2 interrupted plans for the completion of his education. John volunteered for service in the RAF and was trained as a flight mechanic. He was transferred to Canada in 1941, crossing the Atlantic in just five days in the liner Queen Elizabeth, which comfortably outran German Uboats. John took his record collection with him, returning with a larger one and while in Canada sang in Kingston Cathedral Choir and as a member of the camp’s male voice choir. It was a requirement that the engineer would join the first flight of the aircraft he had just serviced. John is here with us today. Clearly he was a more than adequate mechanic.

Posted back to Europe to salvage aircraft, John recalls being in Paris for VE Day and joining in the street celebrations.

Academia beckoned him after demobilisation in 1946 and he became a choral scholar at Kings College Cambridge singing alto. He took his MA in 1949 and half a BMus. Apparently, errant piano playing torpedoed the performance section. While a student John belonged to Consolidated Operas Incorporated, a group of singers who would take over each other’s rooms and render complete operas, John being cast in what he describes as `the heavy female roles.’ Perhaps this had some bearing on his failure to be accepted by the University Madrigal Society!

As a first step in his professional career John was appointed a lay vicar of Westminster Abbey, a position he held continuously for 22 years. Encountering some larger than life characters such as a bass Sandy Henderson who had a wonderful resonance where his brain should have been and the irascible organist Sir William McKay an Australian appointed ahead of better musicians because he was a colonial, John has particular memories of the Coronation Service. Trapped in the Abbey for nine hours he professes not to have needed the portable Elsans which had been pullied up to the triforium to supplement the building’s sanitation. Apparently, the Abbey choir stalls once had a trap door on the cantoris side, though not in John’s time, and, so the story goes, the organist once came down during a service to discover half his choir missing – they had gone to appease their thirst after righteousness.

A salary of £400 per annum needed seriously augmenting if a living was to be made and so John tried teaching. His first appointment was not a success. Shouting at pupils in the morning and singing at a men-only service in the afternoon of the same day proved too taxing. He held an appointment subsequently in the Abbey choir school teaching mathematics, a feat he still can’t explain! He supplemented his income by joining other choirs when time permitted and of course launching his solo career. John helped pioneer the rediscovery of the counter tenor voice, alongside Alfred Deller with whom he collaborated. They both benefitted from the revival of interest in baroque music and John acknowledges a particular debt of gratitude to Henry Washington, an inspirational mentor from whom John learnt a tremendous amount. John soon came to the notice of the BBC and until his retirement gave over 100 broadcasts as well as making many recordings. A 7 guinea fee was Auntie’s standard rate for a soloist and studios in maida Vale were the venues for sometimes chaotic rehearsals.

A gifted ensemble singer, John was quickly recruited to groups such as the Deller Consort, the Renaissance Singers (which he directed for seven years) and the Golden Age Singers, touring in Europe and beyond. In fact the last named, with just five members, gave no fewer than 40 concerts in a two-month trip to America. John was an immediate hit, not just as a performer of early music, but also by virtue of his talents as a cabaret artist. His imitation of Clara Butt singing Land of Hope and Glory and of a cinema organ playing Just a Song at Twilight made a deep impression. Actually, John was still transfixing audiences as recently as two years ago when, here in our own Music Centre, he gave a virtuoso rendition of the double octave German drinking song and I remember too his dispensing with a comb and paper in favour of his nose and fingers to fill in for a crumhorn.

John’s outstanding contribution to musical scholarship and teaching was recognised in his appointment as a professor at the Guildhall School of Music in 1965. He has written extensively about the counter tenor voice, giving great encouragement to such familiar names as James Bowman and, using his reader’s ticket to the British Museum, has studied and transcribed for performance many rare choral works from the early middle ages onwards. Theologians in Bach’s time argued that the counter-tenor voice which seemed to belie the body from which it issued, symbolised the disembodied mystery of the Holy Spirit. “A down to earth bunch singing in a high register” probably fits John and his contemporaries better. The trademark of the British counter-tenor, a clear unadorned line, owes much to John’s influence, in contrast to the brash wobbly style of the Americans, the overdramatic outpourings of the Germans and an insufferably affected approach from the French – James Bowman’s opinions I should add, not necessarily shared by John himself. No mean composer and arranger, John, in his typically modest way, dismisses as a piece of nautical nonsense his setting of the Mermaid, commissioned by the Kings Singers. Friendships made in his early career have lasted to this day, atribute to John’s sociability, loyalty and wonderful sense of humour.

John was organist at St. Pauls Covent Garden, London’s loveliest barn, between 1965 and 1970. The incumbent, Prebendary Clarence May, an ex-actor with dimensions five feet by five feet , was want to hold animal services during which, apparently, his minah bird took a prominent role shrieking `Sylvia, Sylvia’ to be answered loudly from the back of the church by a large Mount St. Bernard.

John will be the first to admit that he can be forgetful. One example will suffice. He and Donald Burgess were performing in a mass at St James’ Piccadilly and the moment for their duet arrived. John failed to rise. Nudged by his anxious partner he stood up eighteen bars later to sing the last two bars with great conviction. John was not alone. He remembers one service of Evensong at the Abbey when a minor canon fell asleep during a long setting of the Nunc Dimittis, to wake up with a start during the Creed and shout “I believe in Pontius Pilate”.

In 1971 John was appointed assistant music adviser to Leicestershire Education Authority, encouraged to apply by Dr Andrew Fairbairn whom he had first met at Cambridge. John has made a crucial contribution to the development of amateur music-making in the county. Immensely knowledgeable, he has drawn on his amazing stock of scores to help amateur groups such as Opera Dei, he has trained youth choirs and he has given practical guidance to countless teachers as well as rescuing many pianos. He also found time to edit a collection of hymns, Their Words My Thoughts, for use in schools. He retired from this position, though not from musical activities in 1986. Showing undiminished enthusiasm, John continues to direct the Vautor Ensemble and he is currently organist and choirmaster at Holy Cross Priory which now possesses a fine new organ through his efforts. He is president of the Leicestershire and District Organists Association and teaches singing part-time at Uppingham School and Nottingham University.

John’s passion for aircraft is exceeded only by his passion for cars. He has owned 34 of these since 1952 including a 1947 standard flying eight drop head coupe, the roof of which could be taken down while driving, a 1929 Morris Oxford Tourer Empire Model bought for £40 in 1957, (this car could run on rails when its tyres were removed) and a 1929 Rolls Royce phantom 2 limousine, a car which comfortably met Queen Mary’s definition of one she could walk through while keeping her hat on. This car, curtains drawn, provided John’s wife Pat with a most suitable location in which to feed her baby daughter while waiting for her husband in Dean’s Yard. John first met Pat in 1963 when they both sang in a Bayswater church choir. They married in the same year. Now a qualified psycho-therapist, Pat`s early career was in teaching. She is an exceptional artist. Their combined talents together with a love of animals, have passed on to their three daughters, Alex, Juliette and Vicky. Alex and her husband Michael presented John and Pat with their first grandchild earlier this year.

My own association with the Whitworth household extends back twenty years. Rehearsals and parties there have always been marked by welcoming and abundant hospitality, fun and constant surprises from the menagerie! John is a remarkable person, raconteur and mimic extraordinary, unfailingly courteous and utterly self-effacing. Generous to a fault he never speaks ill of anybody and only rarely does he use his talent for gentle but well-timed put downs. Quite simply, anyone who comes into contact with John feels better for having been in his company.

Chancellor, ladies and gentlemen, it is a great honour for me to present to you and to the university John Whitworth for the degree of Master of Arts honoris causa.

2 comments for “Presentation of an Honorary Graduand 1998”